Once the nearly exclusive purview of lawyers and librarians, questions of copyrights, freedom of information, and open source programming now reach into the lives of everyone. From the knock-off Prada bag, to the distribution of music, to questions of privacy that could impact national security–all of these issues and more come to the fore with currently available technologies. Previously accepted precepts and practices are being challenged from all sides. Moderated by students from the blog Wesleying.org, this panel of Wesleyan faculty and students will explore these engaging issues with audience participation invited. Panelists are Max Dietz ’16, Assistant Professor of Sociology Greg Goldberg, Dean of Social Sciences Joyce Jacobsen, Isabella Litke ’12 (Ph.D. Candidate at Princeton University) and Music Librarian and Archivist Alec McLane.

Join us for the opening reception of Evan Roth//Intellectual Property Donor. Evan Roth will give a talk on Wednesday, February 5, at 4:30pm in the CFA Hall followed by the reception from 5:30pm to 7pm in the Ezra and Cecile Zilkha Gallery.

We hope to see you there!

Evan Roth’s work occupies the irregular zone at the intersection of free culture with popular culture, where viral media meets art, and graffiti connects with technology. The powerful and surprising images, objects, and experiences in the exhibition Intellectual Property Donor suggest a new way to exist within the current environment shaped by our participation in an increasingly cyber and global world, yet grounded in our need for materiality and personal connections. Roth consistently intervenes into existing systems to subvert or transform them from the private realm to the public. His interest in graffiti and open source programming fall under the rubric of hacking. He often mentions a “handshake” moment between graffiti writers and hackers, noting the inherent potential to reach wider audiences and spread his way of thinking into genera 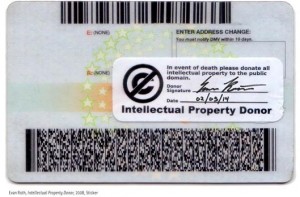 l popular culture by referencing the same systems and open source methodologies. Roth inventively takes his artist’s brain and reaches into the disparate worlds of computer programming and street culture, forging a new way to approach each realm. Based in Paris, he received his M.F.A. from the Parsons New School for Design; and co-founded the Graffiti Research Lab in 2005, and the Free Art and Technology Lab, an arts and free culture collective, in 2007. This exhibition is the largest one-person presentation of the artist’s pioneering, multifaceted work in the United States. Co-sponsored by the Department of Art and Art History.

Born in 1978 in Okemos, Michigan, Evan Roth earned a degree in Architecture from the University of Maryland, and an M.F.A. from the Design and Technology department at Parsons The New School for Design, where he graduated as class valedictorian. Roth worked at the Eyebeam OpenLab, an open source creative technology lab for the public domain as a Research and Development Fellow from 2005 to 2006 and was a Senior Fellow there from 2006 to 2007. Evan Roth co-founded the Graffiti Research Lab in 2005 and the Free Art and Technology Lab  (FAT Lab), an arts and free culture collective, in 2007. He lives and works in Paris, France, where he relocated in 2010, attracted to the cheese and universal health care.

Roth’s work is in the collection of The Museum of Modern Art, New York; it has been exhibited widely in the Americas, Europe and Asia, including the Centre Pompidou and Fondation Cartier, Paris, the Kunsthalle Wien, Vienna, and the Tate, London; and his work has occupied the front page of YouTube. He has received numerous awards, including the Golden Nica from Prix Ars Electronica, Rhizome/The New Museum commissions, the Future Everything Award, the inaugural Transmediale Open Web Award, the Design Museum London’s Designs of the Year, and the prestigious Smithsonian Cooper-Hewitt National Design Award. This is the first major one-person presentation of the artist’s pioneering, multifaceted work in the US.